5 Places That Can Be Called the Hacker's Paradise In 2019 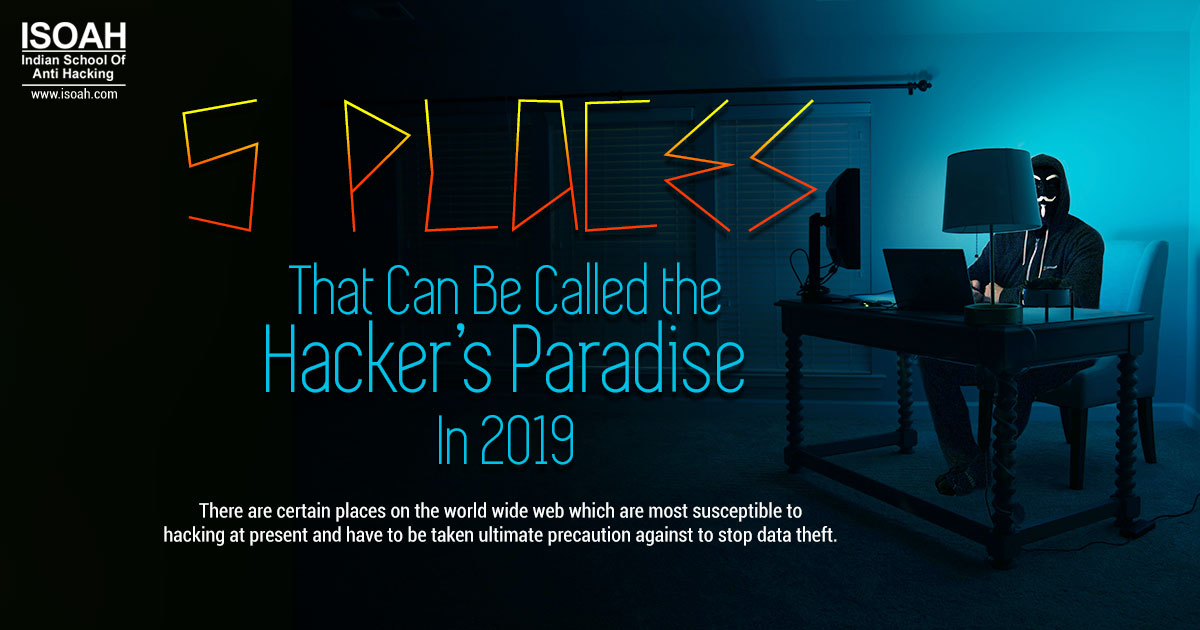 There are certain places on the World Wide Web which are most susceptible to hacking at present and have to be taken ultimate precaution against to stop data theft.

Hacking is a menace these days.
No one is safe with his data on the internet these days.

Cyber criminals are out there at every nook and corner of the virtual world to prey on your precious information bank.

2019 sees the most vulnerable situation with a number cyber space's precariously exposed to the ultimate internet crime, hacking.

In spite of fierce data protection there remains some loopholes which are yet to be guarded against by cyber security experts in order to keep corporate and federal data bases intact.

Let us check them out one by one

Misconfigured cloud storage: The cloud security report 2019 states that 64% of cyber security professionals relate data loss and security vulnerability with storing data in the clouds. Misuse of employee credentials and faulty access controls are the predominant problems for 42% of security professionals, 34% have a problem with cloud compliance while 33% name lack of visibility in security system as their operational obstacle.

Cloud storage has been on the rise as indicated by a 2019 security review. It says that at present 48% of corporate data is stored in the cloud as compared to 35% 3 years ago. Out of this only 32% of the organizations believe data protection in the cloud is its own responsibility while 51% do not use encryption or tokenization in the cloud.

One of the most pressing reasons for security complication in the cloud is careless third party management, despite which very few organizations have seriously implemented third party risk management systems, depending mostly on paper based questionnaire instead of constant monitoring.

Dark web: Security expert Troy Hunt revealed in 2019 a battery of email addresses and passwords culminating upto 2,692,818,238 rows readily available for sale against bitcoins on the dark web. And that's only a small slice of the total magnitude of stolen data which is hacked from organizations and individuals alike everyday due to infrastructural complications or sheer negligence.

Targeted password re-use attacks and spear phishing are apparently simple yet fiercely detrimental as most organizations do not have a constant password policy. Secondary and auxiliary systems thrive on their own access to trade secrets and intellectual property on poor password policy, giving a chance to hackers to steal data easily. Often such attacks are untraceable to improper monitoring or super smart hacking modus operandi.

Abandoned and unprotected websites: According to a research report 97% of the best banks in the world have websites and application with flawed security set up. The same report said that 25% of e banking applications were not protected by a web application firewall, 85% of applications failed GDPR compliance tests, 49% did not pass the PCI DSS test.

Despite 'Attack Surface Management' or ASM most organizations struggle with the growing complexities of their external attack surfaces.

Web applications abound in the list of abandoned assets left by overloaded developers.

Even properly deployed web applications may be risky if left unattended. With just a few exceptions mass hacking often out number the patches released by vendors to counter them.

In order to combat indiscriminate hacking a free website security test should be initiated along with in-depth web penetration testing for the most critical web application and APIs.

However most of these solutions serve only superficial purposes leaving the back end in the wild.

While most of the APIs used by the mobile application deal in sensitive data, their privacy is widely compromised leading to security consequences.

Further previous versions of the mobile applications of bigger organizations can be downloaded and reverse engineered, giving hackers a golden chance to hack into a company's secret data base.

Finally, an array of attacks ranging from primitive but highly efficient brute-forcing to sophisticated authentication and authorization bypasses used for data scraping and theft is bombarded on the network.

Ways to combat this are to set up holistic API inventory, software testing policy, run a free mobile app security test on all mobile apps and backends, conduct mobile penetration testing for critical ones.

Only a few organizations control the software code quality and security by executing automated scanning and a manual code review. However, none is capable of monitoring how the source code is being stored and protected while the software is being developed.

Way to counter this crisis one must implement a policy addressing code storage and access management, enforce it internally and for third-parties continuously run public code repositories monitoring for leaks.

Hacking troubles abound these days in multiple forms confronting corporates constantly. What is needed to control the situation is regular auditing of the networking system by an experienced and expert anti hacking institution like the Indian School of Anti Hacking.