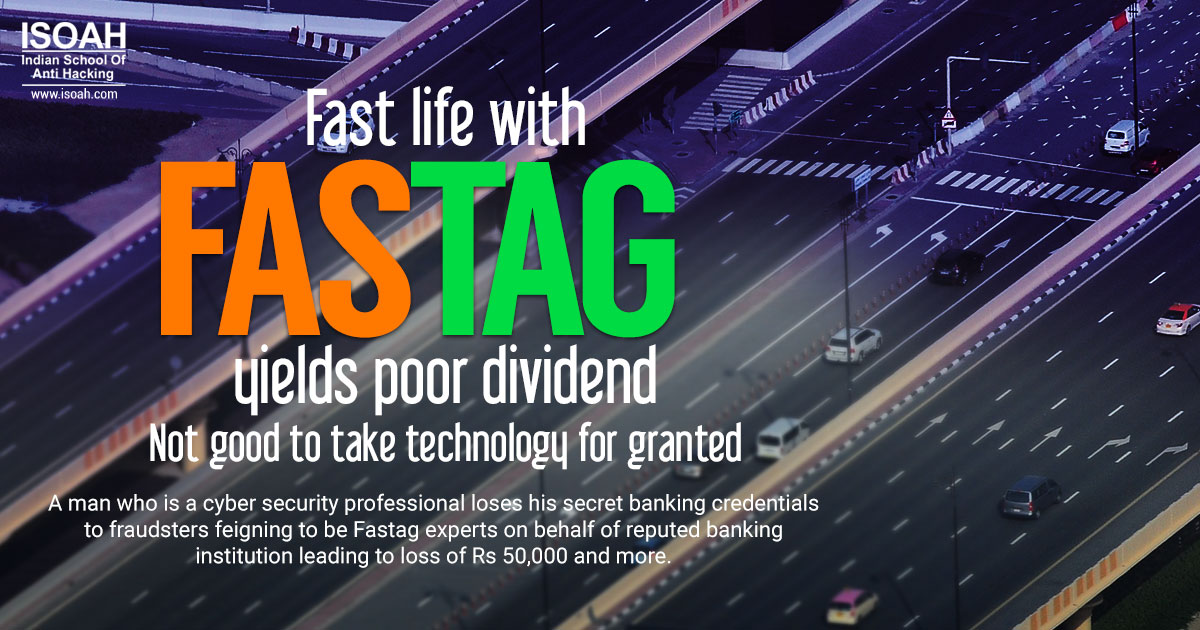 A man who is a cyber security professional loses his secret banking credentials to fraudsters feigning to be Fastag experts on behalf of reputed banking institution leading to loss of Rs 50,000 and more.

Digital India can often be detrimental too, if taken for granted.

Ask the Bangalore based cyber security professional who could not but fall for a quick trap layed in the name of a bank and ended up losing a part of his life's savings.

Well, it started with a simple complaint about a bank failing to refill a fastag wallet on the popular social networking site Twitter.

The victim who resides in the Banaswadi area of Bangalore took to his twitter account to tell the world how repeated requests to reactivate his Fastag wallet with a well known bank had fallen flat on deaf ears.

And there started the whole imbroglio.

Soon after posting the grudge the banking authorities registered his complaint along with his contact details and associated information. Subsequently he received a phone call which was supposed to be from the respective bank's helpdesk.

The caller sent him a link on SMS which was named as the Fastag form of the related bank. The online form was to filled up by him by furnishing his personal and professional details like name, mobile number and Unified Payment Interface (UPI) PIN. On submitting all the details he was sent a One Time Password or OTP and asked to send it to one unknown number, which was compiled with accordingly.

Thus the last nail in the coffin was knocked in unknowingly.

Sums of money started getting debited from various bank accounts of his as he helplessly watched notifications stream in to his mobile intimating him of his losses. The messages started with Rs 5000 and went up to Rs 50,000 as siphoned fraudulently from the victims various bank accounts which his OTP number was associated with. The entire operation took less than 8 minutes to end. Hoping against hope he was quickly able to pull out Rs 30,000 from the grip of the hackstars by transferring whatever residual amount was left after the pilferage to another bank account of his which could not be manipulated by the fraudsters.

A layman would have given up but the victim in this case being a cyber professional himself was able to reach the origin of this money laundering racket. He discovered that the hackers were placed in West Bengal from where they conducted their malicious vigilance. He did submit those details to the cyber crime branch of Bangalore police who confirmed that this was the first case of Fastag fraud in the city.

For FASTag registration banking details need not be shared. Getting tags using the My FASTag app, getting a prepaid NHAI Fastag wallet connected with Fastag or visiting the authorized dealers or banks for the same is what is suggested.

Fastag is an electronic toll collection device executed by the National Highway Authority of India. It uses Radio Frequency Identification technology for toll payments directly from the prepaid or savings account linked to it or straightway from the toll owner.

The more we become dependent on digital technology the more are we exposed to the world of remote cyber crimes. Hackers are constantly out in the wild to take advantage of various vulnerabilities of our's as posed by complicated internet intricacies. ISOAH has been the most trusted name in combating cyber threats with its anti hacking audits.

Social networking is an important tool in the hands of the digital generation. How intelligently can we use that to connect with the world at the same time avoid the perils of overexposure?