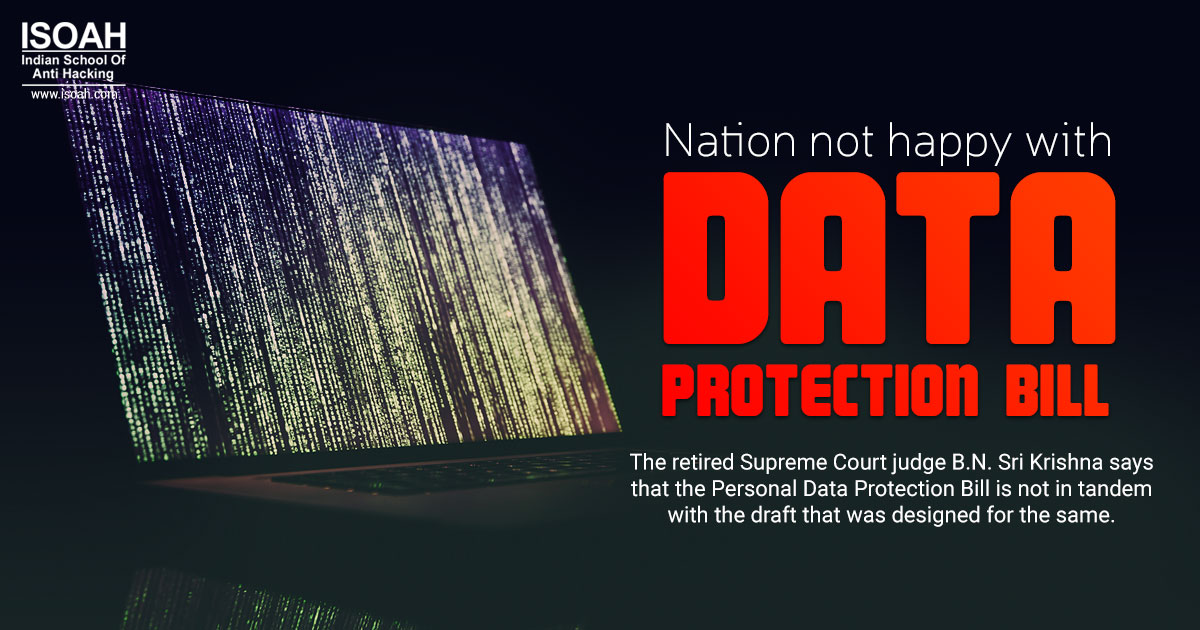 The retired Supreme Court judge B.N. Sri Krishna says that the Personal Data Protection Bill is not in tandem with the draft that was designed for the same.

The retired Supreme Court judge Mr B.N Sri Krishna is not happy with the Personal Data Protection Bill which was introduced in the Lok Sabha on December 11 2019.

According to him it is a unique legislation and contradicts the original draft which mentioned that no data would be processed without the permission of the person concerned.

He further mentions that if the proposed bill is passed in its present design it would go on to get challenged in the Supreme Court, as the original intention behind the law was to protect the privacy of the citizens through their digital enhancement. The bill was drafted at a time when India lacked any legislative binding in that regard and hence had to be inspired from laws of similar nature in other countries like Europe, South Africa, Singapore and Australia.

The drafting panel was headed by Mr. B.N. Sri Krishna who had suggested important safeguards for data and privacy which were not included in the final bill, as is said by him.

He further commented on the constitution of the Data Protection Authority of India saying that the draft mentioned the DPA to be constituted of independent people, representatives of the stake holders and a few government nominees. However all that it is comprised of now are governments nominees making it look like a government department thus going against its purpose? He says that as per the bill data would misconstrue and misused by the federal authorities jeopardizing a civilian's freedom.

Further following the digital revolution in India, the nation has seen an upsurge of umpteen internet based services in form of start up business enterprises. The bill, according to Sri Krishna is supposed to provide a proper guideline for processing and protection of confidential data which is an integral part of cyber services. However, since companies dealing with personal data will have to be bound by the ‘Privacy by Design' policy needing approval from the Data Protection Authority (DPA) it will stiffen the corporate atmosphere in the country thus segregating India from global economic map.

The bottom line of Sri Krishna's rounds off his conclusion saying that if the bill is passed in its present form it would be liable to be challenged by someone in the Supreme Court as ‘unconstitutional'.

ISOAH has been working relentlessly for cyber security and data privacy since the longest time.