Pegasus Spreads Its Wings and How 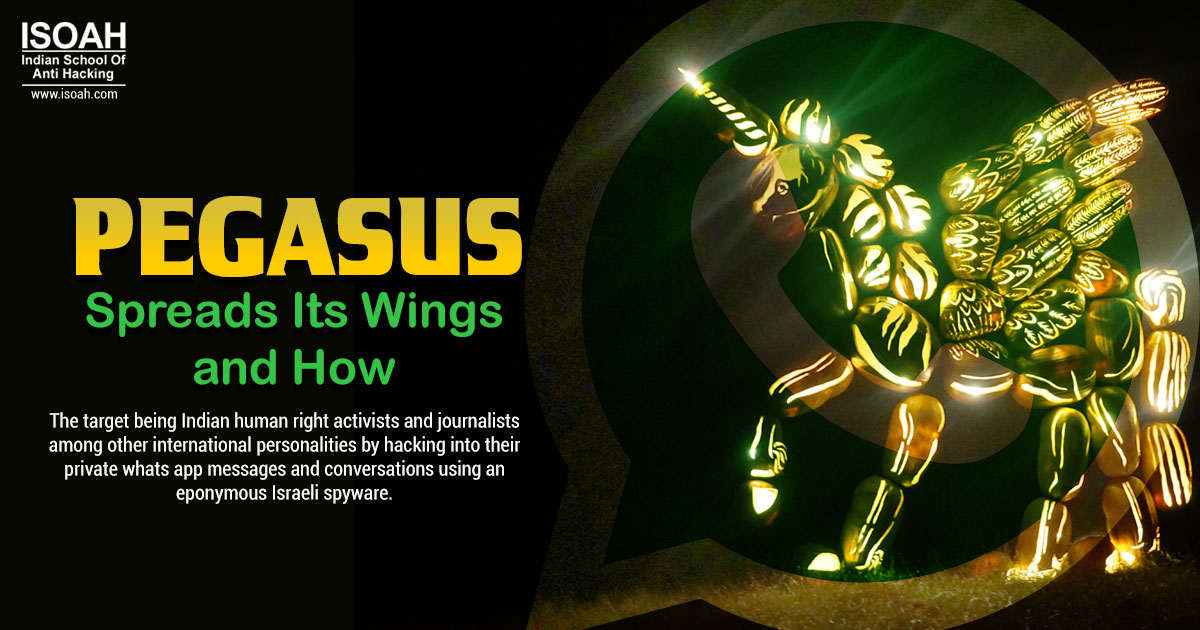 The greek 'god' has spread its wings.

According to Greek mythology the Pegasus is a pristine white winged horse which is recognized by its omnipresence in the socio-cultural life of Greece.

This time it has made its presence felt in the virtual world too, using the messaging mobile application Whats App owned by popular social networking company Facebook.

The target being Indian human right activists and journalists among other international personalities by hacking into their private whats app messages and conversations using an eponymous Israeli spyware.

According to reports presented by the messaging mughal whats app an Israelisurveillance firm engineered a hacking software Pegasus that has helped unnamed enemy spies to hack in to the phones of roughly 1400 users namely diplomats, political dissidents, journalists and senior governments across four continents.

The question that arises is can WhatsApp be hacked?

The answer is yes!

As per CVE-2019-3568 dated 14th May 2019 a buffer overflow vulnerability in WhatsApp VOIP stack allowed remote code execution via specially crafted series of RTCP packets sent to a target phone number. By using this particular WhatsApp vulnerability hackers can install the Pegasus spy ware by just making a WhatsApp call. Even if the target number is not received the spyware can be installed and once installed it can corrupt the victim's camera, microphone, emails and messages.

Pegasus has been used to hack common folk to influential personalities like lawyers and journalists among others.

Out of a whopping 1.5 billion users of WhatsApp, India alone accounts for nearly 400 million, reason enough for the Indian government to raise an alarm.

In order to rid your handset off the spyware the particular mobile set along with its WhatsApp needs to be patched. Alternatively, in case one is a VIP it is advisable for him to avoid using and/or even standing near an affected piece of phone in order to avoid getting voice recognized and subsequently hacked, blocked and looted!

In reply to federal queries WhatsApp has assured 'strong action' against the wrongdoers for violating the privacy of a multitude of Indians.

As a result WhatsApp has filed a law suit in California federal court against NSO group, who is supposed to have developed the malicious spyware.

Interestingly the majority stakeholder of the accused organization NSO from 2014 to February 2019 was an American private equity firm Fransisco Partners, the co-founder and CEO of which being a Bengali Mr.Dipanjan Deb!

Visit www.isoah.com to keep yourself safe and sound in a world threatened by thieves of the digital device.