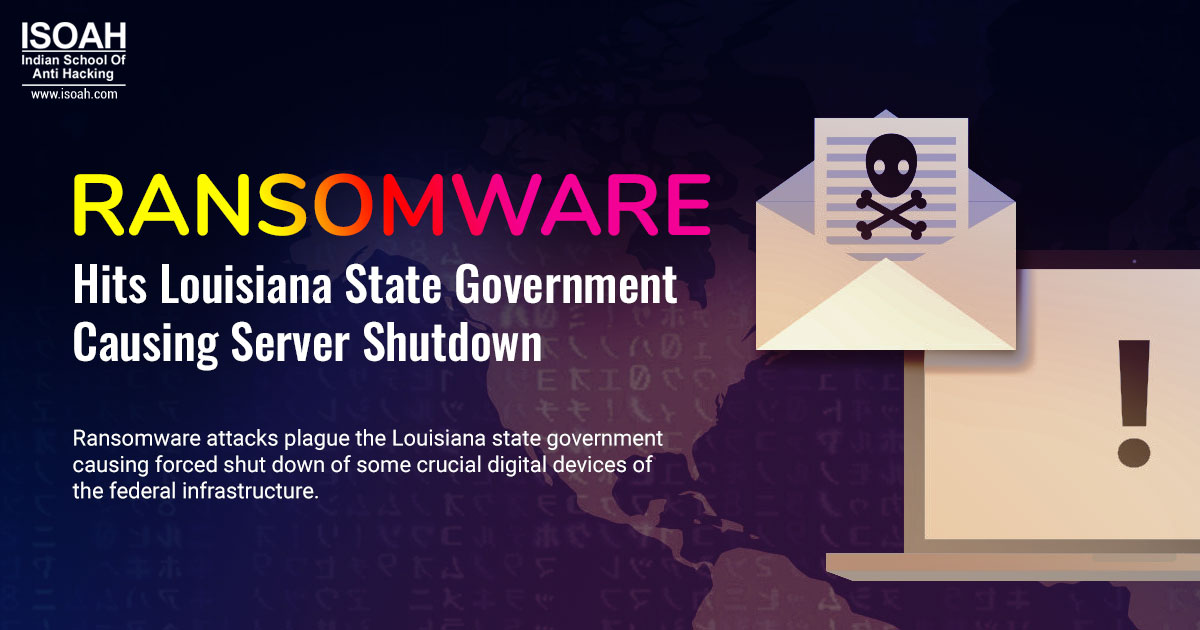 Ransomware attacks plague the Louisiana state government causing forced shut down of some crucial digital devices of the federal infrastructure.

Ransomware attacks on various facets of a nation’s economy like banking and finance, government, healthcare and critical infrastructure does not seem to abate, the latest prey of the same being the Louisiana state government.

Louisiana Governer John Bel Edwards has explained the attack in a series of tweets, saying that he had activated the state's cyber security team for combating thecyber attack and that the shutdown of services resulted from the state’s decision and not due to the aftermath of the attack.

Ransomware attacks means cybercriminals accessing and digitally confiscating files and holding them hostage thus disabling the user’s access to them unless paid a ransom against, typically in bit coin. The Louisiana State Police and several federal agencies are already investigating the cyber attack that has affected nearly every major state agency.

This is the second major ransomware attack that the state government of Louisiana has been inflicted with in 2019. Previously in the month of July Louisiana declared a state of emergency after a similar ransomware outrage that jeopardized nearly half a dozen school districts.

Governor Edwards has also confirmed the similarity between the two attacks in the same year.

Till now it is undecided what family of ransomware malware was instrumental in this attack, how the ransomware intruded into the state’s system and the amount that has been demanded by the hackers as ransom.

However, the governor has announced that there is "no anticipated data loss" and that "the state did not pay a ransom."

It is imperative for all public and private entities to be cautioned of unprecedented digital intrusions wrecking havoc. Institutions like the ISOAH have been working relentlessly to achieve a hacking free environment around with their expert anti hacking audits.